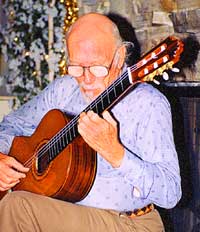 Growing up I had many guitar heroes: my teacher Peter Pupping, who is the reason I am a guitarist today, and Tom Griesgraber, now one of the world's great Chapman Stick players. And of course I looked up to all the greats: John Williams, Christopher Parkening, Julian Bream, Pepe Romero, Pat Metheny, just to name a few. And then there was Don Wilson.
I met Don at the Mira Costa College guitar ensemble. He was in his 60s, retired, and devoted to both his guitar and his boogie board. He used to keep track of his practice and the number of waves he had caught that day on his pocket calendar. His playing was all heart and all music. I can still hear his singing (sometimes grunting) as he performed. I have many happy memories of riding together to concerts as well as his stories of Aaron Shearer (with whom he backpacked). Don famously said "Playing the guitar is like walking ten dogs. Usually everything goes along fine, but every once in a while you go past a fire hydrant, and watch out!"
The piece I remember Don playing most vividly is El Noi de la Mare. Made famous by Andrés Segovia, El Noi de la Mare is a Catalonian Christmas song. Don honed his version to perfection. Borrowing a little from this or that guitarist and adding his own touches until it was a masterpiece. So, it is with much humility that I present my own recording of this great piece, inspired by the master, Don Wilson. Don, I hope you like it!

Posted by William Wilson at 3:27 PM