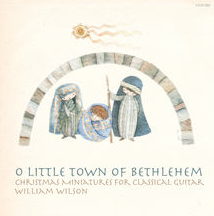 For seven years I had the good fortune of performing Christmas music at Sea World in San Diego, CA. Before Shamu's Christmas show I would perform Classical Guitar renditions of Christmas tunes. Not songs about snow, but actual Christmas music. Each year I would play about 20 or so shows. I added a few songs each season and got to really love my set.
This year I decided it was time I recorded the set. I sat down to record the other night with the goal of recording one or two songs by the end of the night. Two hours later I had recorded about 25 songs! All those years of performing the pieces had stuck with me, even though I hadn't played many of them in two years time they had stuck with me. After I finished my set I decided to record a few new pieces, just for fun. These were tunes I had never played before, just sight reading. And of those about 5 came out really great, with interesting arrangements.
If you'd like to hear the recording here's a sample, What Child is This?. And the full album is up at iTunes: O Little Town of Bethlehem: Christmas Miniatures for Guitar. Enjoy!